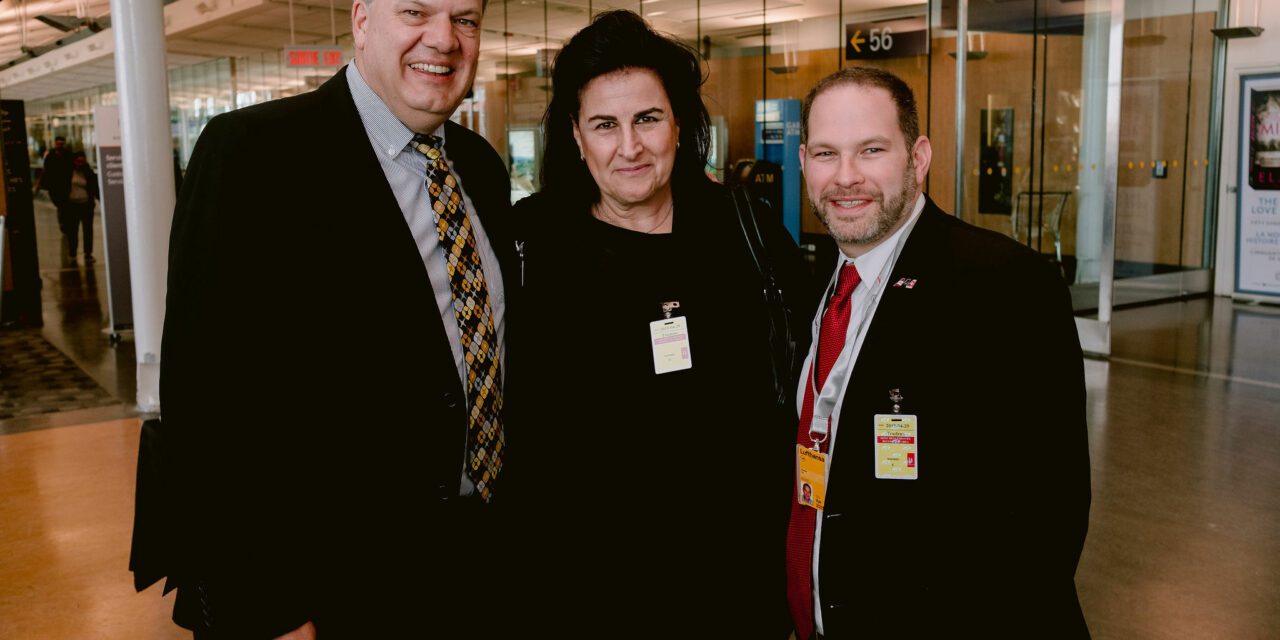 Before sitting down with Tal Muscal and Esther Buchsbaum for breakfast recently at the Snowdon Deli, I must confess to not knowing a lot about The Lufthansa Group (https://www.lufthansagroup.com/en/home.html).

Buchsbaum’s agency, energi PR, was recently awarded the Canadian mandate for the

Lufthansa Group and its Canadian portfolio of brands including Lufthansa, Austrian Airlines, Brussels Airlines and Swiss Airlines. Muscal is Lufthansa’s charismatic Israeli-born director of group communications for the Americas, with an interesting background in journalism with the Jerusalem Post.

The Lufthansa Group chose energi PR was chosen from a shortlist of Canadian PR firms based on its reputation and extensive expertise in the travel and hospitality sector, as well as for its significant consumer lifestyle and corporate media relations experience.  It was clear that energi PR’s longstanding relationships with key industry stakeholders, influencers and key opinion leaders in market was a further deciding factor in winning the account.

Buchsbaum says that energi PR will be part of a global team of agencies representing 41 countries and reporting into Lufthansa’s lead agency achtung! based in Hamburg, Germany.  “We have put together a tailor-made network for the Lufthansa Group that perfectly fits our needs,” said Andreas Bartels, Head of Lufthansa Group Communications. “This enables us to become faster and more agile and to standardize processes,” he concluded.

“We are thrilled to welcome the Lufthansa Group to our roster of valued clients,” said  Buchsbaum. “We look forward to working with achtung! and this newly formed network of exceptional, like-minded agencies.”

I learned that Lufthansa is in fact the world’s biggest airline group in terms of revenue, and is also the market leader in Europe’s airline sector. It is divided into the three strategic areas of Hub Airlines, Point-to-Point Business and Service Companies. The Group’s network carriers, with their premium brands of Lufthansa, Swiss and Austrian Airlines, serve its home market from their Frankfurt, Munich, and Zurich and Vienna hubs. With its Eurowings brand, the Group also offers short- and long-haul point-to- point services in the growing private travel market. And with its service companies, which are all global market leaders in their individual industries, the Lufthansa Group has found success in further areas of the aviation business. Currently the group serve remarkable 271 destinations in 105 countries on four continents and offer 11,111 weekly frequencies. The total fleet comprises some 728 aircraft and its member airlines will be taking delivery of 180 new aircraft between now and 2025. In 2017, the Lufthansa Group employed around 130,000 personnel,

Muscal recently located from the Middle East where he held a similar position as director of communications responsible for the Middle East and Africa.  Young, progressive, and very well respected within the industry he was in Montreal to be part of history as Austrian Airlines, officially introduced year-round flight service to and from Montreal – Vienna. The long-haul flights will operate with a Boeing 767 aircraft. Service will occur daily throughout the summer schedule and five times per week during the winter season.

With Austrian’s new gateway in Montreal, the Lufthansa Group is now fully represented in this region, offering international routes from all three of the Group’s passenger airlines – namely Lufthansa and SWISS. Currently, Lufthansa offers daily flight service from Montreal to Frankfurt with an Airbus 340-300 and daily to Munich with an Airbus 330-300. SWISS flies daily from Montreal to Zurich with an Airbus 330-300. Lufthansa group customers can choose between 15,000 weekly flights to more than 300 destinations through the four European hubs (FRA, MUC, ZRH and VIE).  Now, all passengers in the Montreal area will have the entire Lufthansa Group at their disposal and even more options to choose from when flying to Europe and beyond.

“Montreal has always been an important market for the Lufthansa Group, and now with Austrian Airlines’ new route to the region, the Group’s complete offering to the area has elevated the customer experience in terms of worldwide reach, premium products, quality service and flavorsome culinary options,” said Hans DeHaan, Senior Director, Lufthansa Group Canada.

“Tourisme Montréal, the Alliance de l’industrie touristique and the Office du tourisme de Québec are pleased to welcome Austrian Airlines to Montréal. The airline’s presence is sure to strengthen the city’s position as a major North American hub,” said  Yves Lalumière, President and CEO of Tourisme Montréal.

Star Alliance partner airline, Air Canada, has also begun year-round, daily non-stop service between Toronto and Vienam onboard its Boeing 787-9 Dreamliner. These flights will operate five times weekly during the winter season and daily throughout the summer season. The flight connection between Vienna and Toronto will also be bookable as a codeshare flight via Austrian Airlines. Canada’s largest airline will operate the same number of flights between Vienna and Toronto and feature departure and arrival times comparable to Austrian Airlines.

Lufthansa’s Airbus A350-900 Touches Down

There is more! When Lufthansa’s Flight LH474 arrived at Montreal – Pierre Elliot Trudeau International Airport on April 1,  it marked the first time a Lufthansa Airbus A350-900, the world’s most state-of-the-art, long-haul aircraft, touched down in the city. Montreal joined an exclusive roster of North American cities Lufthansa connects to Munich with its new flagship long-haul aircraft that includes Boston, Denver, Chicago O’Hare, Newark, Toronto and Vancouver.

“Anyone who has flown on the A350-900, whether it be in Business Class, Premium Economy or Economy, discovers that the flying experience on this new aircraft is unlike any other,” said DeHaan, “They experience a product that is very well in line with our company’s commitment to innovation, technology and efficiency. With our A350 aircraft, we can offer qualities and features that maximize the in-flight experience of our passengers to and from Canada.”

The Airbus A350-900 is the world’s most advanced, environmentally-friendly long-haul aircraft. It uses 25 percent less kerosene, produces 25 percent fewer emissions and is significantly quieter on take-off. The aircraft has space for 293 passengers with 48 seats in Business Class, 21 in Premium Economy and 224 in Economy Class. At just under 5.6 meters wide (18.4 feet), the cabin of the new Airbus is more spacious than comparable models of aircraft.

Lufthansa’s A350-900 also offers an exceptionally pleasant cabin environment that makes the journey on board the aircraft even more satisfying. In Business Class, passengers enjoy a self-service area where they can easily help themselves to snacks and drinks throughout the flight.

The Premium Economy Class offers much more than merely a comfortable seat. Passengers can check in two pieces of luggage at no charge, each with an allowable weight of up to 22.7 kilograms (50 lbs). Travelers can conveniently select their favorite food from the menu card, and the food is served on porcelain dishes.

The award-winning Economy Class, furnished in various shades of blue, features special ergonomically-formed seat upholstery and provides travelers with more personal and storage space. The A350 Economy Class was conceived by the design bureau, PearsonLloyd, and was awarded the German Design Award 2018 by the German Design Council.

Throughout the cabin, passengers can use their own mobile device as a second screen, as well as pre-selected programs from the on-board entertainment system up to six weeks prior to flight time.

Due to the aircraft’s particular construction, passengers reach their destination feeling well-rested. This is achieved through improved cabin pressure during the flight, as well as a novel LED lighting system that adjusts with the day and night-time rhythm of the passengers.

Muscal was proud to tell me how Lufthansa, Germany’s national airline, continues to be the largest foreign carrier serving Israel with 14 weekly flights. The group itself accounts for over 70 weekly flights. They started flying to the Jewish State more than 40 years ago. “We’ve stayed in Israel during difficult times,” he said. “A lot of foreign carriers had cut their frequencies to Israel. Lufthansa took a calculated risk that it needed to remain in the market and serve its customers.”

Muscal was born in Israel, but raised in the United States. He found his way back to Israel when he decided to study at Hebrew University. From 2000 to 2005 he worked for the Jerusalem Post, where his beat was macroeconomics, aviation, infrastructure and tourism. It served as the natural jumpstart to the airline industry.

“From the age of three I have been a lover of animation,” Muscal said. “Every time we travelled or picked people up I was a plane spotter.  The whole business intrigued me. When an opportunity arose with Lufthansa, I jumped at the opportunity to work for a major airline. Journalism leads to PR. I knew the head of communications for Lufthansa in Israel and he was retiring. My passion for aviation was well noted. At the time Lufthansa was not a favorite carrier of Israel’s Transport Ministry. They felt we were carrying too many passengers to Israel via connecting flights and that was affecting El Al.”

Based in Tel Aviv, Muscal thrived in his new job.  He eventually got expanded duties, handling communications for the entire Middle East, Africa and South Eastern Europe. Dubai was the regional headquarters.

Muscal assumed his present role in April 2017 and settled with his wife and three children in Long Island, New York. “It was a great opportunity,” he says

As for Montreal, he said “it is a very strong market for us. Montreal is a melting pot with people from all over the world.”